With two days remaining until the start of Conference Championships for NCAA Basketball, we take another look into the current state of March Madness. Recall that to get into the March Madness Tournament, a team must either win their conference championship tournament, finish first in the Ivy League, or obtain one of 32 “At-Large” bids from the NCAA Selection Committee.

Our method of selecting teams focuses on an aggregation of models after finding a covariance structure and dependencies on previous years rankings and the results. For reference, we have managed to correctly select 65 of 68 teams for the previous three consecutive years. Comparatively, we have outperformed CBS Sports (they typically are 62-64 correct) and have tied ESPN every year.

That said, here’s our current projections for conference champions:

Here, we have a few upsets predicted in the conference championships, but nothing major out of the ordinary. Remember that predicted winners are probabilistic winners. This means that even though UC Irvine is predicted to win, it’s at a 53 head-to-head percent probability of defeating UC Davis (at 47 percent), the current conference leader.

With this year being a little crazy with top teams falling to weaker teams on a somewhat concurrent rate, we find there are more than four teams that may miss entry into the tournament. Instead of a “Final Four In” we have to put our “Final Eight In.” These teams are on current trajectory to making the tournament but have a significant chance of finding themselves in the NIT.

Here, we again find Syracuse out of the final eight. Syracuse is out by a score of .00158 against a standard deviation of .001; which means they are statistically in, but hard-threshold out. What this means in regular person speak is that while their ranking is slightly below Georgia, we should not be surprised if Syracuse is selected over Georgia. In fact, if these were my final rankings, I would make the judicial call to remove Wake Forest and replace them with Syracuse. This would not be a mathematical reason, but rather a match what the tournament committee might do. Recall, we gave the mathematical argument why Wake Forest should be included over Syracuse in our last March Madness post. Despite the Syracuse buzzer beater win over Duke this week, Duke was devastated by Miami (with Grayson Allen out). The loss actually downplays Syracuse’s win.

Looking at the first eight out, we have:

Here we find a pile of middling teams. Arguments can be made for Ole Miss and Syracuse to get in. In fact, they have a great chance of swapping with Wake Forest and Providence. There is a dark horse team out there: Kansas State. Let’s get to them right now…

For some reason Kansas State is being listed as either in the tournament or one of the first four out, including the ESPN / Joe Lunardi brackets. They are even a ranked team in the Coaches’ Poll, coming in at 35th overall, which equates to a Ninth seed! So why are the Wildcats ranked so high?

First off, they come from the Big 12, which is a power conference with one of the best teams in the nation in Kansas, and title contender Baylor. West Virginia has a strong resume with wins over Baylor and Kansas, as well as a win over high-preseason ranked Virginia; who’s not anywhere close to top 6 today. Iowa State too has wins over Kansas and Baylor, and have a decent overall record; but have head-scratching losses to Iowa, TCU, Vanderbilt, and Texas. Oklahoma State, who is the fifth team ahead of Kansas State holds our 9th seed and is a common listing as 6th seed in many other brackets. Looking at Oklahoma State’s record, they sport one win over a ranked opponent (West Virginia), five loses against ranked opponents, and a 19-5 record against unranked opponents. Against competing tournament opponents, Oklahoma State is 13-8. This is not a terrible record, but there are better teams than a six seed out there. This is who Kansas State is behind. The favoring of the Big 12 pushes Kansas State up.

Second, Kansas State has a win over Baylor. That’s pretty much it. This win is granting them as much as Marquette’s win over Villanova (Marquette has a better resume by the way) and this is why Kansas State is in the discussion for most analysts.

Third, coaches love power conferences. The fact that Kansas State gets a vote and Minnesota is left out is ridiculous and shows why coaches polls should not be taken too seriously. While it’s not as egregious as the Division III polls that leave out 22-3 teams from their top 25 despite wins over three top 10 teams, we do find that having only 32 coaches voting (less than 10% of the division) will lead to regional biases. This is one of them.

That said, let’s look at Kansas State’s resume. Against teams with a real chance of receiving an at-large bid, Kansas State has a 4-9 record. Against teams effectively eliminated, short of a conference tourney Cinderella run, 13-3. So strength of schedule does not really matter here. They cannot beat tournament teams at a rate acceptable to the NCAA tournament standard. Also going 2-8 in your final ten games does not help either. The rationale for coaches listing this team at 35th and folks having them as a play-in team or sitting in the “final four” is bewildering.

Minnesota is on the other end of the spectrum.  I am happy to see that Minnesota is slowly starting to get love. Even moving into Lunardi’s #7 seed. We have them listed as a 6. Note these seedings are statistically equivalent; so no hate here. So why is Minnesota so underrated? Blame the AP and Coaches poll.

Minnesota is third in the Big Ten. While the conference is not strong this year, Minnesota has posted a respectable record. Their downfall was a string of five losses during conference play; three of which within two possessions. What makes Minnesota attractive is that their only loss out of conference was to Florida State, a contending team. Minnesota has also posted wins over Arkansas and Vanderbilt; teams that have gone on to win over bigger name opponents. But that’s where the comparisons end.

Minnesota’s record against tournament competing teams is 10-6. Against ranked teams it is 2-2. Against “Top 10” teams, no games exist. So you can see, despite no marquee wins over great opponents, Minnesota’s record is superior to Kansas State’s. But yet, Kansas State is ranked higher in the Coaches’ polls and Middle Tennessee State is favored over Minnesota. For this reason, I would love to see a 6/11 match-up between Minnesota and Middle Tennessee State in the NCAA Tournament come March.

Now onto the bracket… 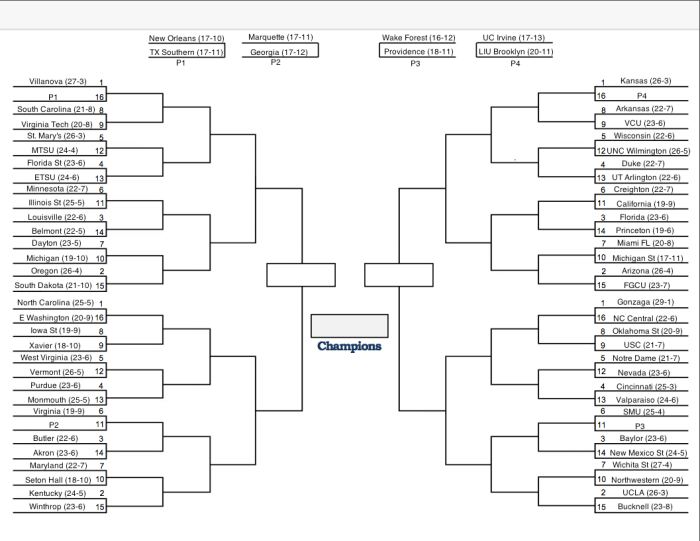 Current Projections for the 2017 NCAA Division I Men’s Basketball Tournament.

Now that you have seen the current projections, we should note that our models keep effectively the Top 25 teams as the Coaches and AP Polls.

Also, if you’d like to see a conference break down, feel free to submit in the comments below!