With the NBA recently announcing the tie-breaking procedures, we finally obtain the draft orders up to the first three spots, decided by the lottery. That is, after the first three teams are selected, the remaining eleven spots of the draft lottery are in order of tie-broken winning percentages. If the Minnesota Timberwolves and the New York Knicks both lose the lottery, then the Timberwolves get one spot higher in the draft than the Knicks.

How Does the NBA Draft Work?

Before we begin, let’s recap how the NBA draft works. The fourteen teams that do not make the NBA playoffs are given a certain number of lottery odds. Think of 1,000 lottery balls, each with a team logo on them. The number of balls with a particular team logo is the probability of that team being selected. For instance, the worst team in the league (Brooklyn) gets 250 balls. With 250 of the 1,000 balls with the Nets logo, the Nets have a 0.250 probability of winning the first pick in the draft.

In reality, each team is given a random selection of numbers between 0000 through 9999 and four balls are drawn, each with a digit. That four number selection is drawn and the team with that combination wins the pick. In case balls outside of the 0000 to 9999 region are selected (yes, they do exist because the NBA is wonky sometimes), that collection of numbers is thrown out and the balls are re-selected. Also, if a team’s number is picked for a second or third time, that collection of numbers is also thrown out and the balls are re-selected. You can see why the hypothetical solution is easier to understand.

The standard weighting system for the recent NBA drafts, including the 2017 NBA draft is

Note that the Timberwolves / Knicks tie-breaker is included with not only the Timberwolves being ranked ahead of the Knicks, but also the two teams having the same odds due to their tie records.

Now, once the first three teams are selected, the remaining eleven positions are placed in the order of odds. That is, say the Magic, Kings, and Mavericks are selected as numbers 1, 2, and 3. Then Brooklyn gets the fourth pick, Phoenix the 5th, Los Angeles the 6th, Philadelphia the 7th, Minnesota the 8th, and so on. This ensures that no team falls lower than three spots from their odds. That is, Brooklyn cannot be worse than fourth. Phoenix cannot be worse than fifth, and so on.

Given the distribution of balls above, it’s relatively straightforward to calculate the probabilities of a team getting first, second, third, and so on. Wikipedia also has the standard (non-tie-breaking) probabilities for the NBA draft lottery:

NBA draft lottery probabilities of seed for each of the fourteen lottery teams. This assumes no ties.

Bleacher Report presented the odds for each team getting the first pick, as well as a top three pick.In their article, they used Tankathon’s calculator to present the probabilities. 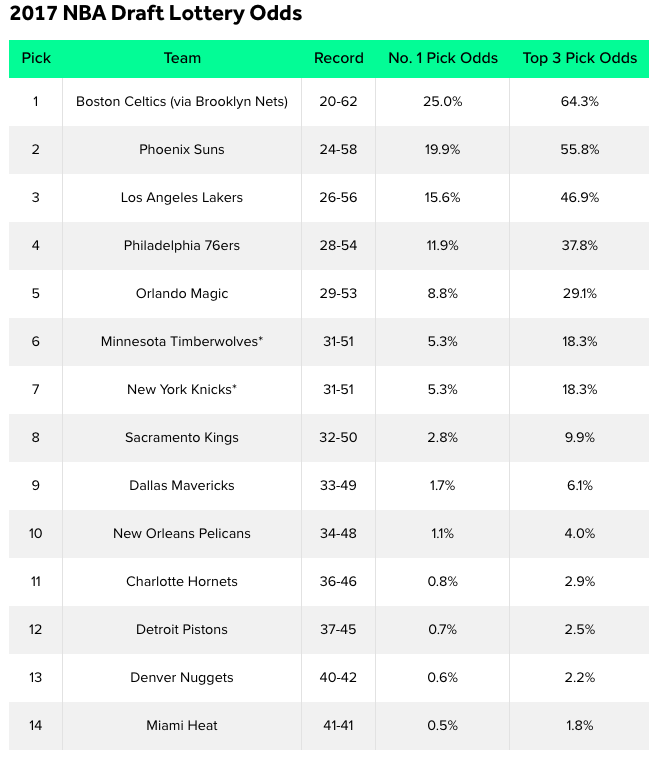 The Bleacher Report article is a little closer to the truth for the lottery odds, but they are also wrong. The reason is that they (and Tankathon) only consider one trade. The solution presented in their article for accounting other trades are to put stars and disclaimers; which actually state that the probabilities are wrong.

The most well-known adjustment to the 2017 NBA Draft Lottery is the Boston Celtics rights to the Brooklyn Nets first round pick. In an ill-advised trade for aging superstars Paul Pierce and Kevin Garnett, the Nets gave their first round rights outright to the Boston Celtics. The Nets, losing both Pierce and Garnett are now the worst team in the NBA and cannot even reap their rewards. In return, the Nets gain the Celtics’ first round pick; well outside the lottery.

If the Sacramento Kings manage to free-fall into the eleventh pick, then the Chicago Bulls gain a lottery selection. With the ‘drop no more than three spots’ rule in the NBA Draft Lottery, and the Kings’ 8th spot, it is possible for the Kings to fall to 11th and lose their pick. However…

The Sacramento Kings can gain a lottery pick if the New Orleans Pelicans obtain a pick outside of the top three. That is, if New Orleans loses the lottery and is does not win a top three seed, they lose their pick to the Kings. This means, the Kings could either end up with no picks, one pick, or two picks in the lottery. Similarly…

Philadelphia could end up with two picks in the lottery if the Los Angeles Lakers’ pick falls outside the top three. Here, the Lakers finished fourth in the draft lottery odds and have a good chance of getting into the top three. However, it is still very possible for the 76ers to have the first and fourth picks in the NBA draft!

There Are Others But Not In The Lottery

In total, there are twelve conditions on the first round of the draft. But only five affect the lottery directly. The other first round conditions are:

This means that Cleveland, Golden State, Houston, LA Clippers, Memphis, and Washington all are guaranteed to not have first round picks. Similarly, the Kings have a chance of being in this company with no picks.

With these five conditions in place, we can now work out the probabilities for each team obtaining each pick in the NBA draft lottery.

Here’s the code for the first pick:

This code will not only walk through every first-second-third pairing, but also identifies situation where the Sacramento Kings gain a pick (and swap) ahead of the Philadelphia 76ers. This results in a top three odds of: 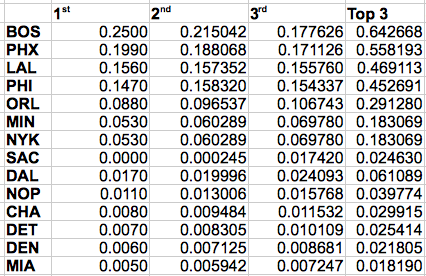 Corrected lottery odds of the first three picks for each NBA team in the 2017 NBA Draft Lottery.

What do we see here? First off, Sacramento has no chance of winning the top spot. Furthermore, they have less than a 0.0245% chance of getting the second pick. In fact, the only chance for Sacramento to get the second pick is if the 76ers get the first pick in the draft.

Similarly, the New Orleans Pelicans have a 96.0226% chance of losing their first round pick to the Sacramento Kings. This would be great for the Kings as they are in a rebuilding mode with four talented early career players in Willie Cauley-Stein, Buddy Hield, Skal Labissiere, and Gerogios Papagiannis. If Malachi Richardson gets healthy and builds strength up, the Kings have a solid young five that they can build around. Requiring a proper floor general and a stretch four would compliment the Cauley-Stein / Papagiannis rotation with Hield as a primary scorer and Labissiere as their lengthy three.

Remainder of the Picks (4 through 14)

After the first three picks are selected, we are then interested in the remaining picks. This is a simple four team conditional, that can be coded primitively as:

We don’t put the coding labor completely here in the post. This can be done repetitively; or if we use object-oriented programming, passing the data structure by making this a conditional loop. Note, it’s relatively easy to do; we just have to not violate the five lottery rules noted above.

By executing this code, we obtain the full probability distribution for every pick in the NBA Draft Lottery:

Probabilities of each team getting a particular lottery spot. Chicago is included for the 11+ pick; Sacramento and Philadelphia are included a second time for their potential second pick.

In case that image looks small. Let’s break down each team’s scenarios:

There we are, corrected probabilities for all 15 teams in the NBA Lottery (remember Chicago has a lottery odd!). Who do you think will win the lottery? Will Philly get two picks? Will Sacramento get a top five lottery pick? Will the Knicks select Patrick Ewing again? Sound off in the comments below!