Over the last five days we’ve been updating a series of aggregated statistical models conditioned on underlying pairwise interactions, which we call the Jacobs model. Over the previous five years, we have correctly picked 65 of 68 teams; whiffing on a couple really good teams (Cincinnati a couple years back was the worst) but nailing teams that has caused controversy across professionals that do not use statistical models (UCLA a couple years ago). As we approach the final day of conference tournaments, we hope to do slightly better but refuse to bias models by introducing unmotivated values such as “gut feeling” which is what currently keeps Syracuse in on many brackets despite the Orangemen proving they really can’t win outside of Syracuse. Unfortunately, no NCAA Tournament games are in Syracuse this year. Furthermore, our projections do not adjust teams based on locations. The only rules for seeding are (1) use or rankings and (2) do not overlap conference foes within the same regional. Due to this, you’ll typically see our seedings be either spot-on or off by two seeds. The one time missed was the Cincinnati pick (they were our first out but grabbed a 9 spot) by seven teams.

Unfortunately for us, the committee that selects teams makes decisions based on the above criteria, but also based on proximity of locations and interestingness of potential match-ups. Some point to these criteria as the “ratings” or “money making” criteria. Many persons unfamiliar with analyzing pairwise comparison data between teams (like results of games) will call this the “power conference bias.” It really isn’t. But that’s another story for another time.

Over these last five days, we watched approximately 15 teams that we considered on the Bubble. A few of these teams have gone back and forth over the last couple days. As today marks the last bulk of games, we should see quite a bit of dust settle.

The only surprise here? Kent State, as they upended Akron. However, due to their weak schedules and hovering near 100 on the models, this disrupts nothing in the NCAA Tournament bids.

Selection Sunday Has One Bubble Buster on the Radar

There are six remaining conference tournaments on Selection Sunday: American, Atlantic 10, Big Ten, Ivy League, SEC, and Sun Belt. For the American, Big Ten and SEC, both contenders are already in the tournament. That’s SMU, Cincinnati, Wisconsin, Michigan, Arkansas, and Kentucky. The Ivy League and Sun Belt are between low ranked opponents; so winner gets in, loser goes home. There’s no threat from these games.

The Atlantic 10 Tournament between Rhode Island and VCU causes some problems. Rhode Island is a bubble team. They are teetering between being on the bubble in some brackets while being in for others. Rhode Island is this year’s St. Bonaventure and Colorado State the year prior (they both were left out). However, if Rhode Island wins, they are guaranteed a spot. And a team that looks undeserving to many; such as Syracuse or USC or Kansas State, will be left out in the cold.

Before we begin, let’s take a look at the conference leaders. Capital lettered teams have won their conference tournament and are guaranteed entry. The other teams are selected due to our rating. 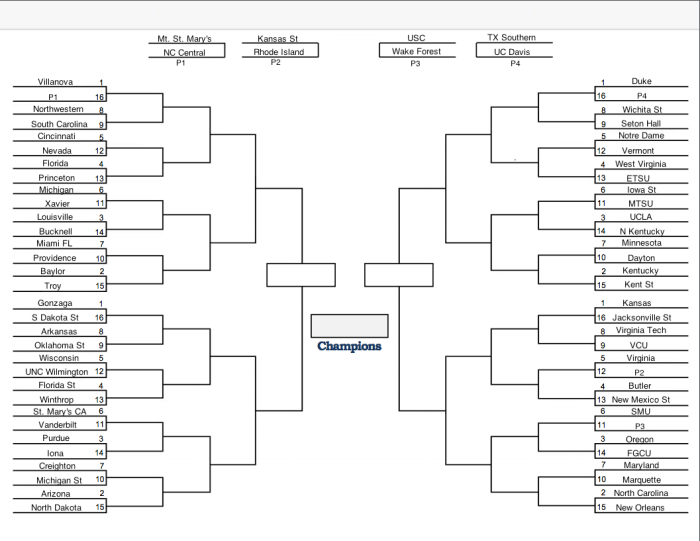 Current Bracket:Current seedings for the NCAA Tournament based on the Jacobs models for rankings after March 11th.

Comparing the results to Lunardi’s current results at 4AM Eastern time, we agree except for one team: Syracuse. Lunardi has Syracuse in. We have USC in. This is the first time we have disagreed on so few teams. Over the previous five years, we have tied with 65 of 68 correct. Typically we have 4 teams exchanged. 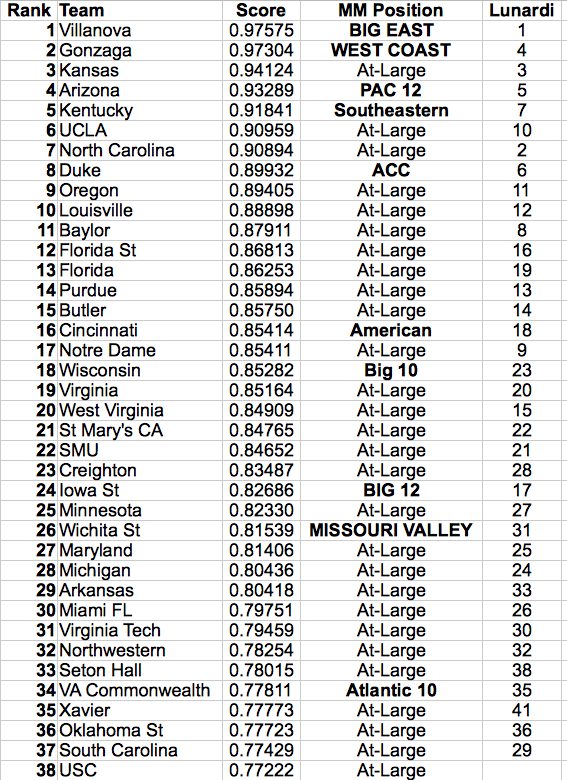 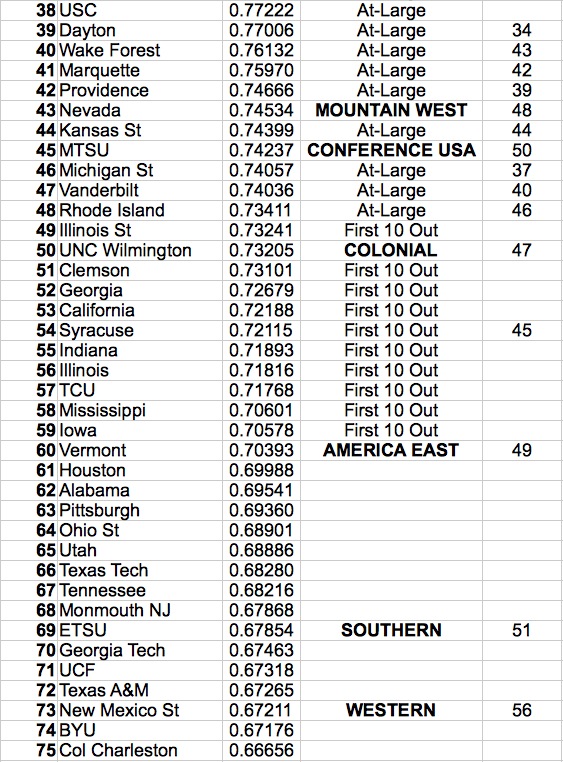 What are your thoughts? Feel free to sound off!