This post is long overdue, and you may completely disagree with everything I am about to lay out; but hear me out: Here’s a way to beat up tanking, redistribute the lottery system for the NBA Draft, and make the playoffs a little more intense.

When the new probability structure came out for the NBA playoffs, analysts were quick to point out that the act of tanking wouldn’t necessarily be addressed. Expected draft pick models started to pop up and show that the probability adjustments just kicked the can down the road in terms of where tanking really starts to pick up. Let’s quickly rehash this argument before diving into insanity: 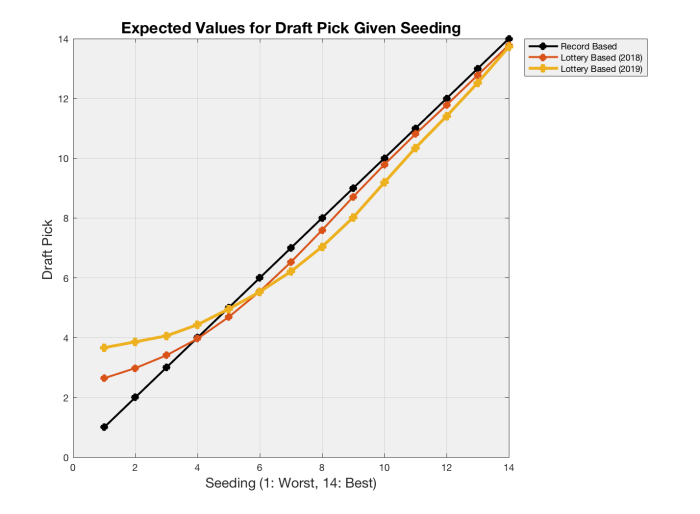 Expected draft pick given the seeding and probability structure for the NBA Draft Lottery.

From the figure above, we see that the black line represents the old “worst team picks first” scenarios. Consider this the pure incentive for tanking: worst team will get best pick. There is absolutely no incentive, with respect to the draft, for a lottery team to win. With the introduction of the lottery, and its iterations over the years, we identified an “optimal” probability structure that lasted for roughly 20 years. This is represented as the red line. We see that the worst team still has the best chances of obtaining the best pick in the draft, but there was uncertainty. From the figure above, we see that a top 3 team is penalized. Their expected draft pick is worse than their seeding. All other lottery teams (except the fourth team) improve their odds of obtaining a top three pick. Unfortunately, the probabilities for the better teams is so low, there is effectively no incentive to continue losing. This effectively leads to a collection of four-to-eight teams that may aggressively pull back the reins on superstars in favor of G-League level talent in hopes to lose games.

To account for this gaming theory, the NBA introduced new probabilities that flatten out the top three seeds and effectively shifts the negative incentive to the top four teams in the draft. In this case, it becomes more attractive for a team to finish 7th, 8th, or 9th worse than before at the expense of being worst, second-worst, and third-worst. In fact, this does eliminate teams from losing as many games as possible to losing as many games as possible to be third-worst. Effectively kicking the can down the road.

So how can we radically change the draft lottery process? By letting every team in the playoffs.

You heard that right. Let’s include every team into the NBA playoffs. But instead of a traditional playoff format, create a “lottery” branch of games that gives every team a chance to play Cinderella while securing a spot in the lottery. The only way to pull this off is to manage a series of negative events: travel, time off, intentional losing, and revenue.

Currently, the NBA Playoff structure is a sequence of four “Best-of-Seven” series among sixteen teams. The teams are organized in a Western Conference and Eastern Conference; many times the organization eliminating a Top-16 team from making the playoffs. Sorry 2017-18 Denver Nuggets. The games are effectively spaced every other day with games played in a 2-2-1-1-1 format: Two games at home, Two games on the road, and then every other for the final three games. The format is to ensure that the “Home-Advantage” team has as many or more home games than their opponent at any time during the series, but that the “Home-Disadvantaged” team gets all their home games in before the “Home-Advantage” team gets all four of their home games.

The minimum number of possible games in the post-season is 60 games; the maximum is 105 games.

With this in mind, let’s start knocking out some playoff rules.

All lottery-bound teams are given a “Cinderella” spot in a two-tiered single-elimination tournament that plays at a home-location of the better seeded team. If you win, you play on. If you lose, you wait and see how the playoffs play out.

Drawback: Due to the 30-team nature of the NBA, this forces seeds 5 through 16 to play in single elimination games. In particular, teams 5 through 8 will be burdened with losing one-to-two home games in case they lose.

Advantage: These single elimination games will bring large amounts of drama and excitement. It forces teams to play hard until the end instead of “jockeying for position” heading down the stretch of the season.

Rule #2: Reduce the Number of First Round Games to 5.

Drawback: The image of Dikembe Mutombo strikes fear in many when “Best-of-5” series is uttered. This was one of the flaws: an 8th seed team has a much higher chance of winning when the series is “Best-of-5” as opposed to “Best-of-7.”

Advantage: However, that 8th seeded team is coming off a travel day after playing an intense single elimination game against a team that may be a little thirsty for making some noise as a Cinderella.

Rule #3: Disseminate the Lottery in Reverse Order from the Playoffs.

The non-lottery teams? They are Best-of-Five teams and are ordered based on records; just as we had in previous seasons.

Advantage: This removes the incentive to fail in the regular season. If you want the highest probability of winning, aim for 5th or 6th worst in the league. Or better yet, try to be a home team that punts their first round game in hopes of getting a higher pick. Either way, it forces teams to not want to finish last in the league heading into the playoffs; but yet promotes weaker teams into better draft picks.

Without further adieu, if we apply this to the 2018 NBA playoffs, using conference placing, we obtain the proposed bracket: 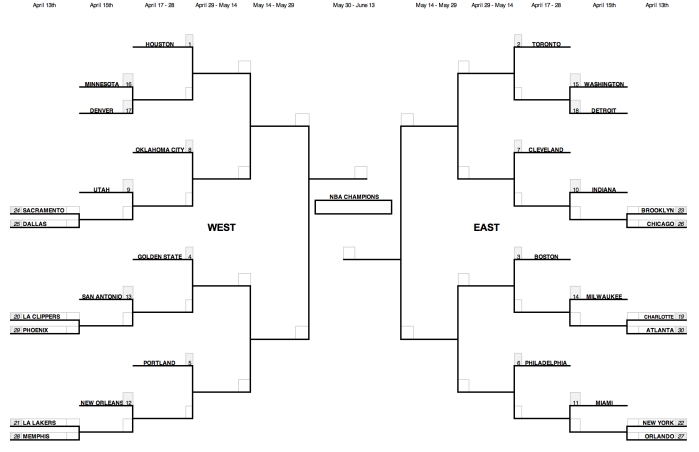 Notice that we merely recreated that Minnesota-Denver “playoff” game from the end of the 2017-18 NBA season. If the lower seeds all lose out, then the lottery becomes:

Now let’s suppose Utah pulls off the upset over Oklahoma City, but lose to Houston. Then nothing changes as no thread into OKC exists. However, if Phoenix goes on a two game win streak over the Clippers and the Spurs, the Suns have pulled themselves out of the lottery and into the 15th pick in the draft (can’t go any lower due to record). Assume for further sake they lose to the Warriors in the Best-of-5 Round.

The lottery order then becomes:

Now let’s suppose we end up with the higher seeds all winning except for Warriors over Cavaliers in the NBA Finals. Then the lottery order becomes:

We see how the lottery results jostle about due to the final seven series of the playoffs. Talk about making fan bases more interested in the outcomes of games in which their teams are not even participating. Furthermore, we see how teams are put as a disadvantage for losing games late in the season as being the worst team no longer places you in position of the best lottery pick (or even top three).

A side benefit is that we no longer have to debate the veracity of the draft, even though it has been proven time and again that is an unbiased procedure. So let’s look at some arguments.

Argument #1: There’s too much travel!

The main argument is commonly about travel. In fact, articles popped up about travel when discussion about reseeding the playoffs came up. Let’s work on understanding how travel is affected. First, there are five travel days built in per seven game series. For the course of the post-season, a team may find themselves traveling upwards of 20 travel days. In our current set-up, no team can travel more than 20 days; and that requires them to play all games possible while being a bottom 12 team in the league. So… travel is actually reduced.

Argument #2: The playoffs are longer!

Take note that while only one day is listed for the single-elimination games, it’s truly staggered over two; much like the first games of the NBA playoffs currently.

There is the same amount of rest, if not more rest in this set-up. The top 18 teams actually get an extra day off between the end of the season and the start of the playoffs. For the other 12 teams, they are on the same rest path as a seven-game series in the first round of the playoffs.

Argument #4: The Regular Season Means Nothing!

This argument is the collegiate argument: If every team makes the playoffs, the regular season is meaningless. That couldn’t be further from the truth. Imagine games where the 8th and 9th seed are on the line. That’s the difference from getting a series versus a single elimination game. Or even between teams trying to get away from the basement. Or games where a single elimination game gets home-court advantage. There’s many more scenarios where the positioning becomes the urgency.

What we can concede is that winning a division gains less value. But then again, can you recite the number of times the Orlando Magic had a chance to win the Midwest Division in the Western Conference? That’s right, Orlando was in the Western Conference in the 1990’s. Divisions aren’t as important as we think they once were; and recently the NBA agreed by eliminating required top four seeding for division champs. Sorry 6th Seeded Miami Heat.

Argument #5: Teams Won’t Buy Into This!

This is probably the strongest argument out there. There is the real possibility that eight teams lose a pair of home playoff games. The tickets, television revenue, and merchandising for those games are huge. Teams have a very real possibility of losing money. However, in a utilitarianism framework, the money lost now is money gained later as the teams that don’t make the playoffs have a very real potential to get home games in the playoffs. A home elimination game none-the-less.

Argument #6: Teams will Intentionally lose the first round games!

Sure, they could. We could see a team gain a home elimination game and then play a G-League quality team in hopes of securing a top 6 pick. But in order to do that, they have to win the right amount of games. It’s harder to make sure you go .500 in the final month than it is to go .100. That’s a tough strategy, but it is a strategy that really only be cashed in once the chips fall into place. And at that point, it’s one game you’re willing to tell your fan base that you really don’t want to make a run.

Argument #7: The Weak will keep on getting weaker!

This is another legitimate argument, as generational talent comes once every few years. Therefore the bad teams must be at the top of the draft in order to cash in and make improvements. However, that’s not how it always fell in the past. Derrick Rose (pre-injury) was picked up by a 9th-seeded Bulls. John Wall was picked by a 5th-seeded Wizards. Many other star players managed to slip out of the top-5 as well. Like Kobe, Steph, Lowry, DeRozan, Kawhi, PG, Jimmy, Giannis, Rudy, etc. Hence it’s not necessarily true that the weak keep getting weaker; although the probabilities get slimmer against generational talent.

So while there are arguments, we can see that the process indeed reduces tanking, improves revenue league-wide, and restructures the lottery process while giving every team in the league something to play for late in the season.

It’s a radical idea. And there may be larger holes than the ones above. However, it’s a way to get Sacramento back in the playoffs. It’s been 12 years.

Sound off if you have ideas on improving the process; or provide your own radical changes! This is simply for fun and just shows a different way to think about all aspects of the playoffs. Remember where we started with this exercise: with absurdity.