Building off our most recent post: Bracketology: Five Days Remaining, we gave our updated brackets along with a few steps for Bubble teams to take during their conference tournament play to ensure entry into the NCAA Tournament. Here we primarily focused on Indiana, Iowa, Illinois, Ohio State, and Michigan State of the Big Ten Conference; Vanderbilt and Georgia of the SEC; TCU, Texas Tech, and Kansas State of the Big 12; Cal and Utah of the Pac-12; Pittsburgh, Clemson, and Syracuse of the ACC; Dayton and VCU of the Atlantic 10; and Illinois State.

From the games today (March 8th) we witnessed:

That’s not looking good for many teams that needed to win to get in. As of right now, with so few games playing today; only a total of 34 games involving only low seeds from the power conference amongst non-power conferences, we should expect very little movement in the brackets. We shall see changes occur over the next day or two as quarterfinals and semi-finals start to play out.

Today we also saw Bucknell punch their ticket to the Big Dance by winning the Patriot league.

Before we begin, let’s take a look at the conference leaders. Capital lettered teams have won their conference tournament and are guaranteed entry. The other teams are selected due to our rating. 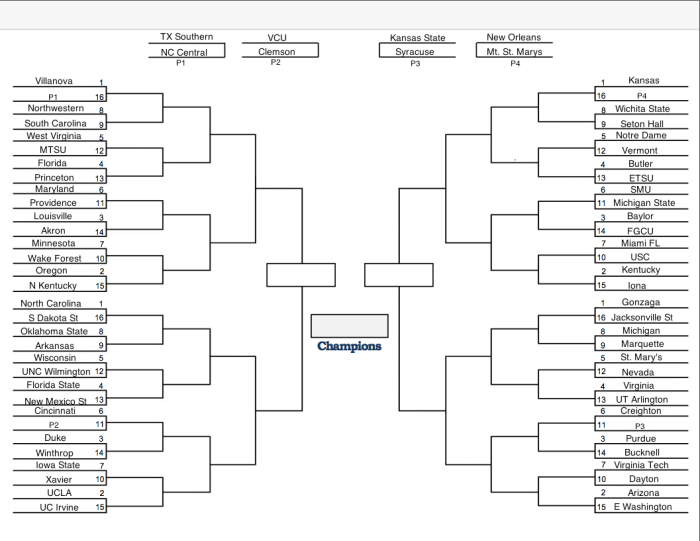 So who is left out? Let’s take a look at the next few teams.

They play later today against Iowa. While the game is not quite a “play-in” for the tournament; lose and go home. See yesterday’s resume breakdown in our previous post (link at top).

To get in: Need at least wins over Iowa and Wisconsin.

No game on the 8th. Play Michigan on the 9th.

To get in: Need at least wins over Michigan and Purdue.

To get in: Need at least wins over Indiana and Wisconsin.

With their loss to Rutgers; Ohio State is out for good. They have dropped four spots and cannot gain ground as their conference tournament run is over. This team should find room in the NIT.

Vanderbilt plays their first conference tournament game later today against Texas A&M. This is a must win game. Details about their resume is on our previous post.

To get in: Need wins over Texas A&M and Florida.

Georgia plays their first conference tournament games later today as well. They need a pair of wins to have a fighting chance of making the tournament.

To get in: Need wins over Tennessee and Kentucky.

TCU won their game today and kicked up two spots. Getting the win over Oklahoma was the first requirement. Now they must defeat Kansas to have a legitimate chance of making the tournament.

To get in: Need to beat Kansas on the 9th.

Texas Tech’s loss to Texas today not only ended their conference tournament, but it also dropped them from #78 to #84. Texas Tech is eliminated from making the Tournament.

Pittsburgh lost to Virginia. This drops them from #75 to #77; not the direction they want to go to get to #68. With no more games to play, Pittsburgh is out.

Cal barely got by Oregon State. Oregon State is not a good team. While Cal benefits from Pittsburgh, Ohio State, and Texas Tech losses; the Golden Bears only move from #77 to #76. They need to beat Utah today. Not only that, a win may only push them to #74 on the list. They will need to beat the winner of Oregon / Arizona State.

To get in: Need wins over Utah and Oregon / Arizona State.

Utah is in worse shape than Cal. They need to make a run if they want a chance to make the Tournament. Utah moved up one spot because A) they did not play today and B) Texas Tech lost to lowly Texas.

To get in: Need to beat Cal and Oregon / Arizona State; possibly need to win the Pac-12 Tourney.

Illinois State moved up a spot due to attrition. Illinois State is out because of their weak schedule and winless record against power conferences. But if all teams ahead of them fail quickly, a case can be made for Illinois State. This is a far-fetched situation; but sentimentality goes fairly far. Joe Lunardi still is keeping hope for such sentimentality.

Ole Miss managed to creep up the rankings today without playing a game. This is in part to the fast fails of Ohio State, Texas Tech, and Pittsburgh. They have a tough uphill battle to get in and will need a couple clutch wins to make a case for the selection committee.

To get in: Need to beat Missouri and Arkansas at a minimum. Most likely will have to make the title game.

So who is in danger of dropping out of the tournament?

Kansas State moved up a spot because Syracuse lost to Miami. They square of against Baylor later today. If they cannot win, they will tumble out of the Tournament. The win will surely move them up a couple spots as Baylor is a heavily favored team. However, sitting at the edge with a terrible conference record; we may see a Big Ten member steal their spot.

To get in: Need to beat Baylor.

Syracuse lost to Miami yesterday. This was a must win game. And while they are technically still in; they may find themselves on the outside due to a Big Ten tournament that is capable of anything. Selection Sunday is going to be nerve-wracking for the Orangemen as they will wait to see the teams around them either prosper or fail over the next two days.

Clemson lost to Duke today and is still miraculously hanging on to a spot. They are in the same situation as Syracuse. This is a hang on for dear life situation. It is easy to expect both Syracuse and Clemson to be out of the Tournament in a couple days.

Wake Forest won their first round conference tournament game against Boston College but then fell flat yesterday against Virginia Tech in the second round. This leaves the Demon Deacons at the bottom of the NCAA Tournament list. They are currently in, but face the same problems as Xavier for getting in. This is a team that will be squeamish come Selection Sunday.

Michigan State did not play yesterday, but they play today against Penn State. A loss will push the Spartans closer to out of the Bubble into Syracuse territory. A win stabilizes them and most likely gives them their seed. However, a win against Minnesota secures their position in the Tournament.

To get in: Need to beat Penn State.

Providence has a solid record and should be fine for the tournament. However, they are playing Creighton to open the conference tournament. They need to win this game to be comfortable. Win and they are in. Lose and they have to hold their breath on six other teams.

To get in: Beat Creighton.

Xavier is in worse shape than Providence despite the better ranking. Unfortunately they are playing a Butler team that has been pretty solid all season. They need to win this game to settle themselves into the Tournament.

To get in: Need to beat Butler.

That’s where we will leave most teams today. Tomorrow, we will take a quick glimpse on how today’s games shape the rankings for the NCAA Tournament. Here, we will leave you with our comparisons to the Coaches Poll, AP Poll, and the Lunardi selection.

One final note: We find ourselves two differences from Lunardi’s poll. We have included Clemson and Kansas State; while Lunardi has included Vanderbilt and Illinois State. We agree that Vanderbilt has the best chance of removing Kansas State. Similarly, Clemson may be thwarted by Indiana or Iowa. However, it cannot be justified that Illinois State gets in based on their weak schedule and inability to beat even middling power-conference teams.

What are you thoughts? Feel free to sound off and catch the Conference Tournament action going on right now!