This requires construction of a Team Defensive Rating, a Defensive Points Per Scoring Possession, and a Stop Percentage. In this article, we take a look at the construction of defensive rating. But more importantly, as it is a box score calculation, we look to see how it compares to truth by using play-by-play data.

Individual stops is calculated as

Note that this is a three part equation for steals, blocks, and defensive rebounds; in that order. Let’s break down this somewhat intimidating equation through each of these three parts.

The second part is blocks. In this case, blocks do not necessarily ends a possession. In fact, a block also may end a possession as a defensive rebound that may or may not be obtained by the player who obtained the block. So how do we break down a block?

The first parentheses deals with rebounding relative to shooting attempts. This can actually be written down in terms of a tree diagram of conditional probabilities. 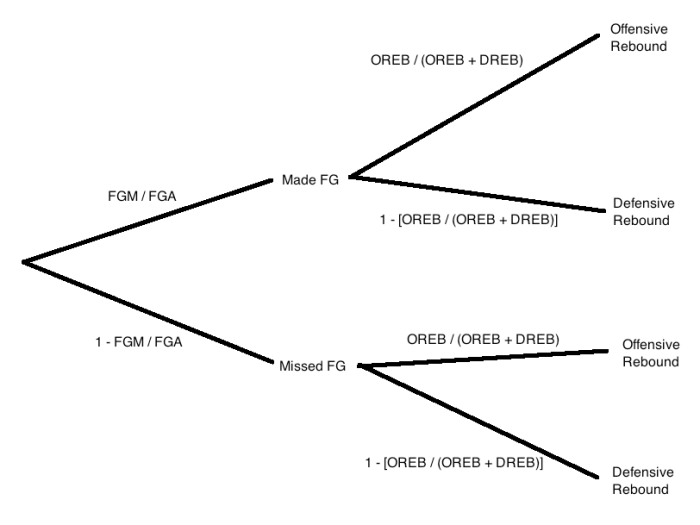 Conditional probabilities that identify rebounds relative to shooting attempts. Probabilities are placed on the branches as the leaves are the results. Yes… there’s an estimated probability of defensive rebounds on made field goal attempts…

Next, we focus on the team contribution of stops when a player is in the game. It is given by the formula

Even more craziness than the individual stops… Some terms look the same as above!

The second term focuses on turnovers that are not generated by steals. These are bad passes out-of-bounds, shot clock violations, traveling, double-dribbling, et cetera. The first and second terms are scaled by minutes played.

This time instead of scaling by minutes, we scale by fouls.

Adding Individual and Team Stops, we obtain stops for when a player is in the game. This is the most complicated portion of identifying defensive rating. We can then calculate stop percentage for a player. This is given by

Recall that possessions is a complex computation that is found in offensive ratings.

I use the term DPpSP as defensive points per scoring possession because it saves space on the formula graphic.

Team defensive rating is simple to compute. In this case, it is merely

This identifies the points given up per 100 possessions.

We are finally able to calculate defensive rating. Recall that formula to start the article? If not, here it is…

If we substitute in our short-hand terms, we obtain the exact same equation:

So we can work in reverse and use the above formulas to compute defensive rating. In order to compute this explicitly, we can simply identify these box score elements:

Application to a Game: Philadelphia 76ers versus Houston Rockets 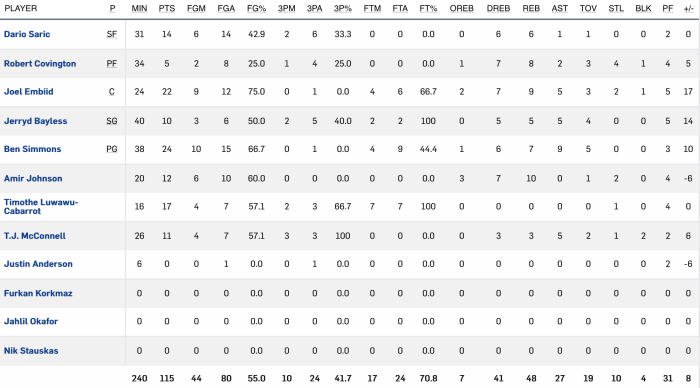 Let’s look at Joel Embiid’s defensive rating. Here, we will not count anything other than box score statistics. In this case, we have the following:

This results in a stop percentage of

That’s a stop percentage of 74.3857 percent. Note that this does not mean that Embiid stops 74% of possessions. This is contribution scaled by a factor of five and includes team effort. This is the rationale for the 80%-20% split in defensive rating.

Through the use of play-by-play data, we are able to walk through the entire game and see all actions occur. The first order of business is to look at the number of possessions. Through counting all possession termination actions, we obtain a total of 204 possessions. This results in 102 possessions for both the Rockets and 76ers. Recall that the estimated possessions was 104.72 possessions.

Getting into foul trouble with five fouls, Embiid found himself playing in six spurts throughout the course of the game.

At the end of this stint, Embiid’s defensive rating is 77.78.

Coming back in to close out the first quarter and start the second quarter, Embiid participated in 23 possessions over the 5 minutes and 27 seconds of playing time. This resulted in 11 defensive possessions that resulted in 14 Houston Rockets points. The games slowed pace a little, resulting in 14.21 seconds per possession.

For one last stint during the first half, Embiid participated in 9 total possessions, 4 of which were defensive possessions. During these four possessions, the Houston Rockets picked up 3 total points on a single three point attempt by James Harden.

Despite the one scoring possession in four attempts, Embiid had little to directly attribute to the stops. Rebounds by Jerryd Bayless, Dario Saric, and Ben Simmons terminated the other three possessions.

The average possession was 13.78 seconds over Embiid’s 2 minutes and 4 seconds of actions. At the end of this stint, Embiid’s defensive rating is 100.00.

Embiid started the second half for his fourth stint, which lasted 3 minutes and 45 seconds. During this time, Embiid played in a total of 14 possessions; 7 of which were on defense. During these seven defensive possessions, Embiid recorded nothing on the defensive end. Up to this point Embiid managed two defensive rebounds and one steal.

Houston managed to score only six points over the seven possessions, converting only three possessions. A fourth possession, Philadelphia was bailed out by two consecutive misses from the foul line by Clint Capela. The other three possessions were terminated by Covington (steal, rebound) and Simmons (rebound).

The average possession lasted 16.07 seconds. At the end of this stint, Embiid’s defensive rating is 96.77.

Embiid entered the game late in the third quarter for a short one minute and 36 seconds for a total of six possessions. With an average possession of 16 seconds per possession, Embiid played in three defensive possessions.

Houston converted on one of the three possessions, again bailing out the 76ers by missing both free throws after an Embiid foul. With the three points coming on another Harden three point attempt, the Rockets only mustered one point per possession during this stint.

At the end of this stint, Embiid’s defensive rating is 97.06.

Embiid closed out the game with a significant eight minute and eleven second stretch of time. This stretch witnessed 35 total possessions, which started to speed up, thanks to free throws late. The average possession was 14.03 seconds. Of the 35 possessions, Embiid participated in 17 defensive possessions.

It was during this time that Embiid collected many of his stats. During this stretch Embiid picked up 5 defensive rebounds and one steal. Embiid also picked up his only block of the game. Unfortunately, Houston retained possession as the block went out of bounds.

Compare this to the team defensive rating of 104.90, we find that Embiid’s presence indicates an improvement in defense; however, his individual stats only seem to appear in his final stint. This implies that Embiid is not the sole reason for the defensive improvement. Seeing the actual statistics from when Embiid is on the court, Robert Covington turns out to be the premier defender. This in turn indicates that the combination of Covington and Embiid identifies a solid defensive tandem for the 76ers.

Comparison of Truth versus Estimated

As we have seen that the 76ers’ defensive rating is actually 104.90, we had an estimated team defensive rating of 102.17 from the Oliver equations above. That’s not a terrible estimate by any stretch. However, this comes from estimation of possessions.

This shows that the estimation process varies about the truth, and while it is a method for approximating points per 100 possessions, we are able to compute the actual defensive rating by performing play-by-play calculations.

Despite these flaws, if the user only manages to have box score data, we see that defensive rating is not egregious in estimation. Instead, it’s a carefully thought out process that leverages assumptions of uniformity to get close to the truth.

Instead, we may say that the players are the same, as the uniformity assumptions may lead to large enough variances such that both scores are realistic for both players.

One thought on “Defensive Ratings: Estimation vs. Counting”