Now that the Finals are upon us (finally!), let’s take a look back at the Markov Chain simulator that we built for this post-season, evaluate how we did, and take a look at the NBA Finals! 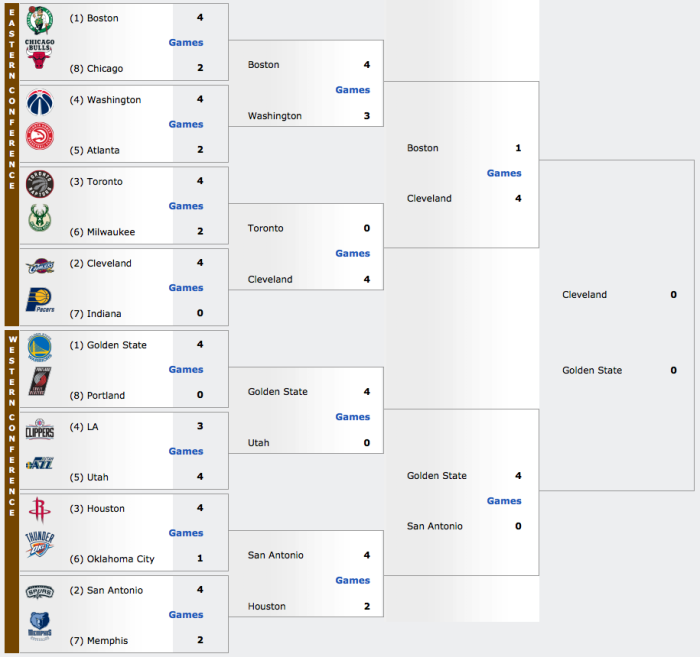 Post-season results up to today. Image courtesy of ESPN.

There were no surprises in the first round of the NBA Playoffs. In our first posting, we had the following results:

Warriors over Portland in 5

This ended up being Warriors in 4, which was the second highest probability among the eight possible outcomes for this series. No surprises here.

Clippers over Jazz in 7

This series was deemed as a coin flip of a nearly perfect coin with a 51.98% chance of the Clippers winning in the final game. There is little surprise that this would be the series we missed.

Spurs over Grizzlies in 6

Rockets over Thunder in 6

This one was over in 5. There’s no surprises here.

Celtics over Bulls in 6

Wizards over Hawks in 6

Cavaliers over Pacers in 5

This one was close, granted a missed last second attempt by Paul George; and an epic collapse to close out the series. The expected value for games played was 5.02.

Raptors over Bucks in 7

This was our upset special (six, seven, or eight winning) with an expected number of games sitting at 6.51. Sans a cold shooting streak that ultimately led to a last second miss by the Bucks, we could have easily had a game seven. No surprises here.

In the second round, we saw an entire team collapse midway through a series. With MVP candidate James Harden falling apart, the Houston Rockets came undone to lose to the San Antonio Spurs. Many experts picked the Rockets to upset the Spurs in six. Our algorithm did the same. But even with an injured Tony Parker and hurt Kawhi Leonard, the Spurs dismantled the Rockets; turning Harden from MVP caliber to a bench player by game 6.

Warriors over Jazz in 5

This was another heavily favored Warriors series with the confidence region covering win in 4, win in 5 and slightly over a win in 6. With a handy sweep of the Jazz, the Warriors fell within confidence of the statistical model.

Spurs over Rockets in 6

This series was the lead into this section. The Spurs managed to beat the predictor model, which trains on the regular season. Despite being the number two team, the Rockets had the right entrance into the season to make the Conference Finals. Instead, the Rockets imploded and we’re left trying to figure out if Harden just quit.

Celtics over Wizards in 7

Nailed this one. This was our upset special for the second round. The Wizards are a solid team and matched up perfectly with the Celtics. Granted, this required a John Wall buzzer beater to help push the series out; but the Wizards fired on all cylinders and completed what our models expected of them.

Cavaliers over Raptors in 5

Another expected thumping and the Cavaliers delivered. The Raptors may be the three seed in the Eastern Conference, but there’s a lot of missing parts for them to be considered real contenders. The addition of Serge Ibaka helped; but Toronto needed Jonas Valanciunas to step up into a larger role. However, even if he did, it may have been still too little for the firepower Cleveland stores in their line-up.

This should not be a shocker for the Cavaliers and the Warriors to win their conference finals. So much so that I left off the updates as it would just be pandering to what was expected. But here were the results.

Warriors over Spurs in 6

This series didn’t play out as expected, mainly because Kawhi’s injury in the first game effectively casta long shadow over the series. Whether or not you think Zaza Pachulia is a dirty player, one fact was made clear. LaMarcus Aldridge is not going to carry a team into the Finals. Kawhi Leonard’s disappearance from the series, combined with Parker’s injury, left San Antonio with too little to break up the flow of the Golden State offense, turning a potential six game series into a third consecutive Warriors sweep.

Cavaliers over Celtics in 6

This series was never in doubt, but the surprising part was that the Celtics were unable to stretch the series to six or seven games. In the previews we gave for this post-season, we made one comment clear about the Celtics; they are going to lose because of rebounding. In this series, the Cavaliers dominated the boards from the jump, gaining obnoxiously high disparities in rebounding numbers; being out-rebounded by an average of 5 boards a game. Adjusting for expected points per gained-or-extended possessions, that’s roughly 8 points given up on the glass.

Now For The Finals…

We are finally met with the two teams long expected to be standing in the NBA Finals: the Golden State Warriors and the Cleveland Cavaliers. There’s been a lot said of these two teams. Just pull up Twitter and read the hundreds of articles pouring in. If there’s two to read; there’s a good video analysis given by Zach Lowe and another piece on how to play rotational defense on the Warriors by Nicholas Sciria. Some of their work tangentially touches on a game plan I submitted to a Western Conference team last season. Let’s take an abbreviated look at the Warriors. Disclaimer: Sorry, but no data can be made available due to non-disclosure. Also, some adjustments are made for this go-around due to Kevin Durant being in the line-up this year.

How to beat the Warriors:

The Warriors are a multi-faceted team that relies on constant movement and precision shooting to spread out defenses and force defenses to either gamble or make bad decisions. While offense initiates through Steph Curry, majority of the offense is driven through Draymond Green either through screens on shooters or by maintaining possession of the basketball at the top of the key and forcing a defender to guard him in case of a dribble-hand-off; or sag off for potential help defense on weak-side cuts to the basket. Either way, Green is rarely the threat in this position with three-point shooting capability under 35-percent.

Instead, focus needs to paid attention to two primary areas of the Warrior offense: pin-down screens and weak-side backdoor cuts. Klay Thompson and Steph Curry look to rotate through a singular pin-down screen and possibly off a second screen when either receiving the ball, or shortly thereafter. Once obtaining the ball, if a defender is more than six feet from Curry or Thompson, their field goal percentage soars to over 50-percent. This means that either the screening defender needs to switch or a defensive rub need to push Thompson and Curry and extra couple hundredths of a second off their rhythm.

On switches, Coach Kerr is keen on forcing larger players to guard Curry and Thompson after the switch, allowing for them to use their speed to open driving lanes to the basket. Curry will finish at the rim while Thompson is prone to either pull up or look for an open shooter when the defense collapses. Instead opt for the defensive bump.

When Curry is bumped on pin-down screens, his angle to receiving the basketball tends to drift an extra ten degrees away from the basket, forcing a lengthier time to shoot or drive. This extra bump also forces Curry to receive the ball an extra 1.6 feet further than usual reception of the basketball. When this occurs, shots off the screen drop to below 30-percent. For Thompson, his field goal percentage barely changes, but his amount of field goal attempts drastically reduces. Meaning Thompson will most likely drive or pass.

On defensive collapses, the Warriors will either look to finish (particularly Curry) or find the open weak-side shooter. In smaller line-ups, this will be Shaun Livingston or Andre Iguodala at the mid-range or weak-side slash. In larger line-ups this will be Thompson spread out on the arc. Smart rotation is needed here. Particularly with Durant being a primary option in these situations for the 2016-17 season.

On the offensive end, the weakest player on the court defensively is Steph Curry. Klay Thompson is the top defender as opponents have the high shot-refusal percentage with Thompson guarding them. That is, the player refuses to shoot when Thompson is guarding them. Futhermore, majority of Curry’s 160+ steals come from either passes or from non-primary ball-handlers that have taken a pass from a Thompson-defended player.

With Curry guarding the on-ball defender, two things happen: points are scored (Thompson gives up less than 1 point per drive on all-star guards; Curry gives up more than 1.2 points per drive on the same set) and Curry loses time on the floor either through potential foul trouble or tiring out.

How to Beat the Cavaliers

Contain LeBron James and Kyrie Irving. Both are massive play makers that are phenomenal at both attacking the rim or shooting from the perimeter. Containing will require three primary defenders; leaving one Cavalier open for majority of the possession. In the past, Kevin Love and Tristan Thompson were viable options. With Love’s recent explosion in shooting, this option might need to be J.R. Smith.

A speedy line-up helps in this defensive posture as it forces Love to guard players they are not familiar with. In the Warriors case, this is an Iguodala or Livingston. In this case, Love will not stray on the perimeter as much; closing out the biggest threat in containment. In this case, J.R. Smith becomes the biggest threat. Make him shoot contested jump shots through close-outs. If he hits 40 points, it will be a miracle in this series.

If the Cavaliers opt for a better shooter, such as Kyle Korver, attack him on offense. Korver has one of the slowest close-out rates in the league for starting guards. Spread the court and attack.

That said… there’s a prediction that comes from the algorithm:

Warriors over Cavs in 6.

Despite the Warriors pick, I personally hope this series goes 7 games. And even then all in overtime. This should be one of the greatest series in NBA history. Both teams are rested and at full strength. The greatest basketball player of this generation is leading multiple all-stars in LeBron James. The hottest shooting team with the best game-plan to open the court sits across them with multiple MVP’s in Steph Curry and Kevin Durant; not to mention two of the best defenders in the league in Klay Thompson and Draymond Green.

The key player in this series is Kevin Durant. He can ruin the Cavaliers defensive game plan. Despite disappearing in big games in the past and failing to deliver in the Finals in 2012; Durant will be the lynchpin on whether the Warriors cruise or struggle this Finals.

So what do you think? Who will win this series? Tip-off is in a minute…