This past week 44 NBA games were played as we continued to watch the Golden State Warriors push to a 14 – 0 start; matching the best start to a season for a defending NBA Champion since the Boston Celtics from the 1960’s. Similarly the Philadelphia 76ers continued to have a rough start to the season as they extended their winless start to 0-14. This week, we see a stable trend in our rankings, when compared to last week. Only two big jumps in the rankings took place as the New York Knicks climbed 10 spots after a 3-0 week and the Washington Wizards jumped 9 spots with a perfect 2-0 week. The Oklahoma City  Thunder took a tumble down 8 spots as they pieced together a 1-2 record while missing Kevin Durant.

Some key games of this week were the Detroit Pistons 104-99 win over the Cleveland Cavaliers, the Brooklyn Nets 90-88 win over the Atlanta Hawks, the New York Knicks 93-90 win over the Oklahoma City Thunder, the Washington Wizards 97-95 win over the Detroit Pistons, and the New Orleans 104-91 win over the San Antonio Spurs. These keys games gave a decent shake-up to the rankings, pushing the San Antonio Spurs down one spot from third to fourth overall and the Washington Wizards up into the top ten. The Atlanta Hawks tumbled out of the top ten due to their losing record for the week combined with their loss to the lowly Brooklyn Nets.

Fitting the beta regression model, we obtain a 0.7011 r-squared value, still showing a strong fit to the data. Retro-fitting the model, the games are all modeled perfectly (this should eventually not be the case later in the season).

Beta regression fit (red) of the first 195 previously played NBA games (blue). R-square fit of 0.7011. The x-axis is game number and the y-axis is probability of “first team” winning; first team is defined by alphabetical order of team’s city name.

The Golden State Warriors continue to maintain their dominance over the NBA as they extended their record to 14-0, currently two games ahead (in pace) of the famous 72-10 Chicago Bulls. Their record combined with wins over key teams drive their ranking score well above all over teams. On the other side of the spectrum, the Philadelphia 76ers and their young team are struggling at 0-14 and therefore have a similar score as the Warriors, only in the other direction; placing them at the bottom of the standings.

One takeaway from the updated standings is the rise of the Eastern Conference this season. Currently in the top ten there are 6 Eastern Conference teams: Cleveland, Chicago, Indiana, Miami, Detroit, and Washington. While Cleveland, Chicago and Miami are mainstays, we are glad to see Indiana return to older form as Paul George has returned from his gruesome injury from over a year ago. Washington is currently the most volatile team of the bunch as they leaped several spots to get into the top ten. In a similar vein the Detroit Pistons, who have started off the season strong, are a pleasant surprise as they have played well with a couple key wins over the season (Atlanta Hawks, Chicago Bulls, Cleveland Cavaliers). However they are quite volatile as well given their narrow losses (Washington Wizards, Los Angeles Clippers) and ugly resume against bottom teams with losses to the Los Angeles Lakers and Sacramento Kings.

Combining an average of the standard Bradley-Terry Model and the Beta Regression model, we can then predict the final standings for the NBA season. We should note that these predictions always assume that the rosters never change, no major injuries occur, and no trades take place. While completely unrealistic, that’s the reality of our simple model. 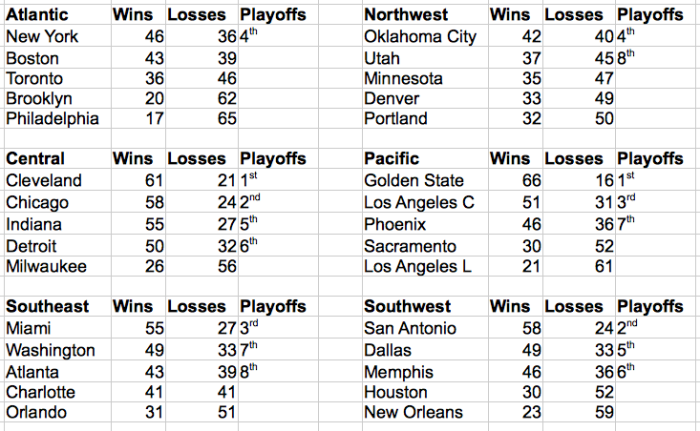 Predictions for the NBA Final Standings (as of November 22nd, 2015) based on a weighted average between the Bradley-Terry Model and the Beta Regression model.

It should be noted that the Bradley-Terry model indicates that the Golden State Warriors are predicted to go 82-0, while the Beta regression model conservatively predicts 50-32. The weighted average pulls 16 games in each direction to settle on 66-16. With 68 games to go, it is hard to tell how well the Warriors will indeed finish. However, it ill be fun watching them try.