Map of the ten primary districts of Oakland, California. (Map provided by blog.ouroakland.net.)

Oakland, while being one of the most diverse cities in the United States, Oakland has a reputation for having a high crime rate. In 2013, there were 90 reported homicides, 4,922 reported robberies, and 2,792 reported assaults. In fact, citydata.com gives Oakland a 971 crime index (High), where the national average is 294.7. However, the question is whether if crime is uniform in Oakland. If crime where uniform, then we expect the crimes to happen at any location within Oakland at any time. If the crimes occurs in specific areas, then the violent crimes locations are targeted areas, therefore reducing the randomness of the crime.

Using SpotCrime open data from 2010, we can use geo-encoded data to map out three types of violent crimes in Oakland: Shootings, Robberies, and Assaults. To do this, we take the latitudes and longitudes for each crime over a desired time interval and treat each as a kernel density estimate (KDE). We fit the bandwidth using a minimization of the asymptotic mean square error of the KDE.

Using the SpotCrime data available, we applied a two-dimensional KDE with optimal bandwidth to obtain a distribution of shootings over 2010.

Distribution of Shootings in Oakland, California. (Data courtesy of SpotCrime)

From the distribution of shootings, we see that shootings primarily occur in three specific regions of Oakland: West Oakland, Elmhurst, and Central East Oakland. The probability distribution shown as a third dimension, with the same heat map properties shows the concentration of the shootings to each area.

Kernel Density Estimate of the distribution of shootings in Oakland in 2010.

We see the three major areas with respect to the peaks and note that that concentration to these three neighborhoods suggest that the distribution of shootings are not random across the entire city. Since Oakland is approximately 78 square miles, we would like to identify the percentage of Oakland that contains the most amount of shootings. To do this is simple: since we used a KDE to approximate the true distribution, we can order the KDE from largest to smallest and sum up to the probability of interest. Using that sum, we then move from highest to smallest values along the components, collecting the associated geo-boxes that each KDE represents, until we get the desired proportion of the sum. The result is the contour defining the posterior probability of shootings in Oakland.

Distribution of shootings in Oakland, California along with three confidence regions: 95% (red), 75% (blue), and 50% (green).

The contours illustrate where the majority of shootings occur. The region enclosed by the red contour indicates where 95% of the shootings occur in Oakland. In total, there are 3,146,715 total grid locations for the KDE. Each grid location defines a 0.0071277-mile-by-0.0075556-mile box. Noting that Oakland is defined by 78.02 square miles, we are able to define the percentage of the city where which the shootings are committed. For the 95% region, we require using 514,907 grid points. Since each box is approximately 0.000053854 square miles, then 95% of shootings in Oakland occur in 27.73 square miles; which is 35.54% of Oakland. This is nowhere near an expected 95% if the shootings were uniform.

Now if we investigate robberies in Oakland, we find a completely different pattern. This time, the violent crime is not centralized to three specific districts, but rather are distributed in other sections of the city.

Distribution of Robberies in Oakland, California. (Data courtesy of SpotCrime.)

We see that robberies are primarily concentrated to the Chinatown and Central, San Antonio, and Fruitvale districts. In fact, it is quite rare for robberies to occur in West Oakland and Central East Oakland. Completing the same analysis using contours, we find that half of the robberies in Oakland occur in only 5.6007 square miles, or only 7.18% of Oakland. It should be noted that approximately 4,922 robberies took place in Oakland in 2014. This analysis indicates that roughly 2,500 occur in this small area of Oakland, which comes to approximately 4-5 robberies per day in these three districts.

Assaults in Oakland appear to be more uniform compared to shootings and robberies. 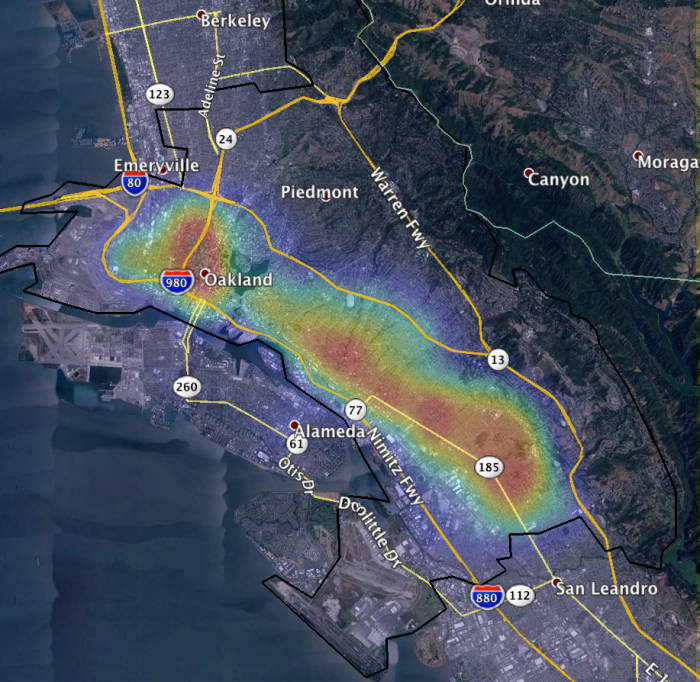 Distribution of Assaults in Oakland, California. (Data courtesy of SpotCrime)

Here we find the main six districts: West Oakland, Chinatown and Central, San Antonio, Fruitvale, Central East Oakland, and Elmhurst all experience assaults. However, there is a slightly higher concentration in the Chinatown and Central district, where downtown Oakland is located. Overall, there were 2,792 assaults in Oakland in 2014. The 50% contour plunks for small sets spanning across Oakland, covering over 10% of the city.

As we have displayed a series of maps showing the frequency of respective crimes and have broken out a method for measuring the volume and frequency of the violent crimes, we have not indicated adjustments for population. While there are 10 districts listed for Oakland, a vast majority of the population of 391,000+ persons live in the six main districts illustrated above. Therefore, while 4-5 robberies occur in a small 5 square mile radius, we must note that there are sections of San Antonio with 50,000+ persons per square mile (about 173 persons per square city block). Thus 4-5 robberies per day in these 5 square mile sections equate to 1 robbery for every 5,000 people in this area. To bring this back to a more tangible number: approximately 0.0346 robberies per city block. Thus a robbery is expected on any random city block in the San Antonio district once every 29 days. That is, if each person is robbed once in a given year, there are 13 of the 173 persons to be expected to be robbed. At this rate, a person should expect at least one random robbery attempt made against them every thirteen years.

However, for regions such as West Oakland with roughly 17,000 persons per square mile, we found that in the 2.29 square mile region of shootings; based on SpotCrime data, a total of 18 shootings occurred in the neighborhood in 2010. This breaks down to 0.049315 shootings in this region per day; 0.00017064 shootings per city block on a given day. This equates to a random shooting on a city block once every 5,860 days (every 16 years). Since there are approximately 57 persons per square block, a person should expect at least one random shooting in West Oakland every 912 years. While this is completely ludicrous in numbers, this shows that random shootings in Oakland are excessively low.

Unfortunately, there were still 18 shootings in West Oakland; amongst the 104 shootings for Oakland in the entire year. Hence, we expect reporting of a shooting in Oakland once every three days; once every few weeks in West Oakland. This rarity both prompts the media to broadcast stories about the shootings but also makes people tend to think shootings and homicides are a high probability event.

Before we close, we must advocate the act of vigilance. While all the numbers above show that Oakland is not as a violent city as many crime indexes tend to make people think, crime is definitely prevalent according to the numbers. Our discussion above involves random crimes. This is not always the case. In fact, this may be rarely the case. Crime mapping programs such as SpotCrime and CrimeMapping allow persons to identify where, how, and when crimes occur. This allows persons to be vigilant in their day-to-day activities in or near these locations.

So what do you think? What city would you like to see next?

One thought on “Oakland, California”