Milwaukee, Wisconsin is the largest city in Wisconsin with approximately 600,000 residents and has started to notice a sharp increase in violent crimes over the recent couple years. For 2014, the Federal Bureau of Investigation noted through the Uniform Crime Report that Milwaukee had reported 90 murders, 395 reports of rape, 3,520 robberies, and 4,859 reports of aggravated assaults. In comparison to Oakland, California, which had reported 80 murders, 209 rapes, 3,481 robberies, and 3,140 assaults; Milwaukee can be argued that the two cities are similar in nature when only considering raw totals. In the case of Oakland, we found that the crimes were committed in high population density areas which actually totaled into relatively rare random events. In this article, we apply the same logic of (falsely) assuming all crimes are random in identifying the highest probability of random violent crime.

Disclaimer: We force all crimes to be deemed as random since a common worry for travelers is random crime. Targeted crime dramatically increases and decreases probabilities of being participants in violent crime. Similarly, while we post numbers reported by FBI and analyze them in detail, but this is in no way an indication of “how dangerous” cities are. Instead, we attempt to offer insight only in the distribution and highest probability of random crime; which in the end is only a probability. We’ll tackle the sensationalism and controversy in crime rankings in a future post.

Milwaukee is broken up into 202 small-scale neighborhoods that span 96.12 square miles. Milwaukee is also notorious for being highly segregated racially and socio-economically; not so coincidentally highly overlapping. 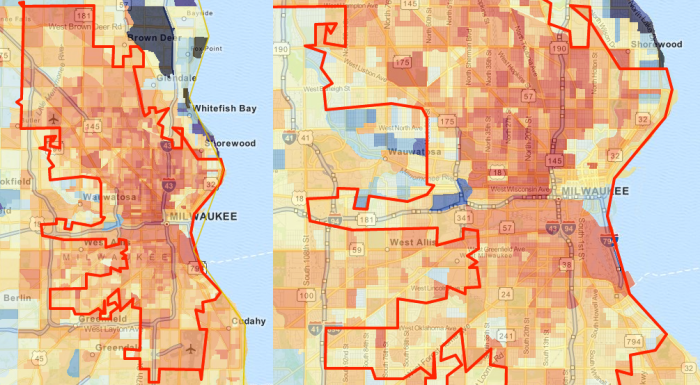 With an estimated population, as indicated by the three year average by the FBI, of being 600,374, Milwaukee has a population density of 6246 persons per square mile; or approximately 21 persons per average city block.

While the FBI reports only on four main violent crime categories, shootings are not considered as a separate crime. Therefore shootings typically fall into murders and aggravated assaults. Using data provided by spotcrime.com, we are able to map out and study the distribution of shootings in Milwaukee. To serve as a reminder, shootings are not murders.

From the SpotCrime data, the Milwaukee police department data flow reported 2,996 shootings; majority of which are deemed harmless discharges or over-reported accounts. Since the data is unable to distinguish the difference between quality of shooting, we are forced to include them all the same.

However, shootings are not uniformly distributed. Instead, majority of shootings occur in specific regions in the city. 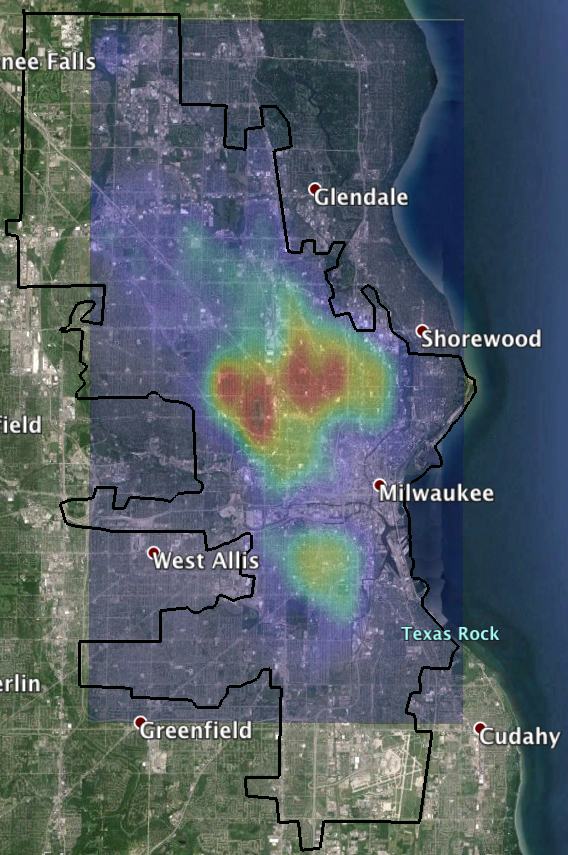 Distribution of shootings in Milwaukee, Wisconsin with high concentration regions (red) located in the northern half of the city.

Similar to Oakland, California, the distribution of shootings in Milwaukee are highly concentrated to a few district-sized regions. While it is simple to look at the diversity map from the University of Virginia to immediately correlate the high shooting rate regions of Milwaukee to African-American neighborhoods and moderate shooting rate regions of Milwaukee to Latin-American neighborhoods; the results in Oakland (which does not experience this effect due to its widespread diversity) show that the correlation does indeed doe not imply causation. In fact, correlating the median household income map of low (below $30,000 per year) and low-medium (between $30000 and $45000 per year), we obtain almost an identical correlation to racial make-up of the neighborhood. There has been extensive study into root causes in crimes, many causes ranging non-inclusively from income inequality, hate crime, ego, education level, and boredom.

Distribution of Shootings in Milwaukee, WI with Contour (red) containing smallest region of 95% of shootings.

This equates to 0.0110 shootings per block outside of the contour region. For a particular person, noting that there are approximately 21 persons per average city block, this equates to a random chance of experience a shooting is 0.000524 shootings per year; or one shooting per 1,908 years. 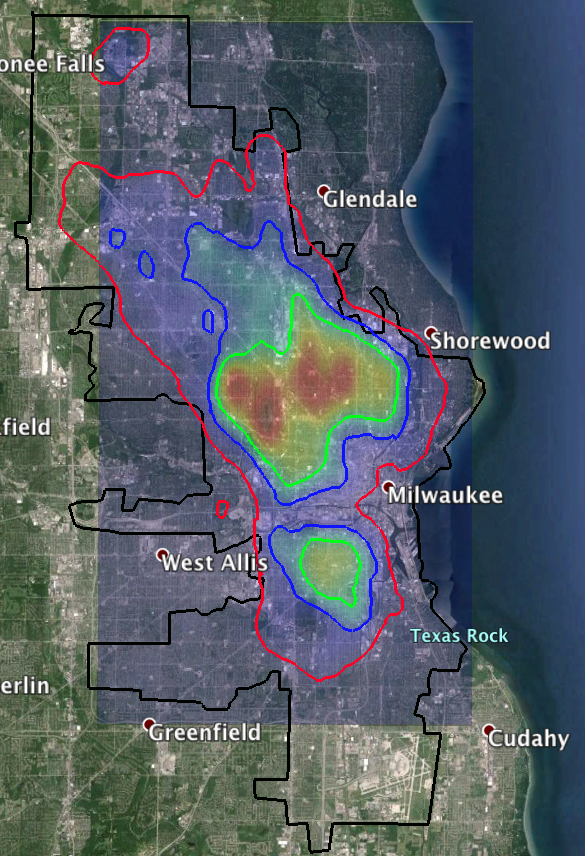 Distribution of shootings in Milwaukee, WI. Contours depict smallest regions where 95% (red), 75% (blue), and 50% (green) of all shootings occur.

Here we see that 75% of all shootings occur within a 22.754 square mile region of Milwaukee; only 23.51% of the city. Thus the region in-between the red and blue contours experienced 599 shootings over the 26.203 square miles, which breaks down to 0.0791 shootings per block. Breaking this down to per person, we note that a random person is to expect one shooting every 265 years.

Continuing one once more, we find that half of Milwaukee’s shootings occur in a 10.77 square mile patch, only 11.12% of the entire city. In-between the 75% and 50% contour, which we will call the fringe region of the high-concentrated shooting region, we see there were 749 shootings reported over 11.984 square miles. This equates to 0.2163 shootings per block, which translates to .0103 shooting per person in this region. For a random person in this region is then to expect a shooting once every 97 years.

In the final region of high-concentrated shootings, we have 1,498 shootings spanning over a 10.77 square mile region. This equates to an average of 0.4812 reported shootings per city block per year in this region. Breaking this down to per person, a random person is in this region is then to expect a shooting once every 44 years.

If we investigate the robberies in Milwaukee, we find that there are 3,520 robberies reported by the FBI-UCR for 2014. This equates to approximately 586 robberies per 100,000 persons. Again, this number is seriously misleading as the distribution of robberies is not uniform.

Distribution of robberies in Milwaukee, WI. (Data provided by SpotCrime.) 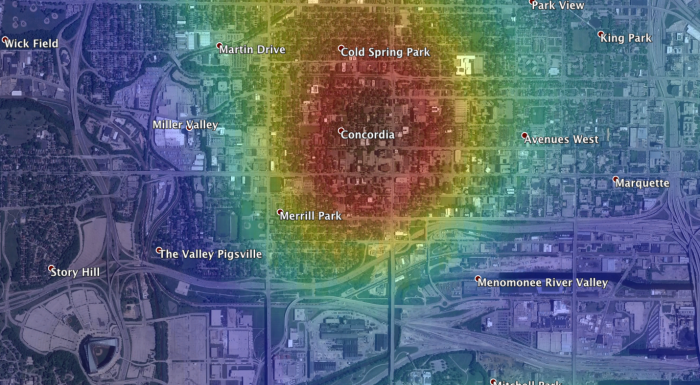 An interesting note for this region, and may serve as a possibility for the robberies, is that this section of the city has the highest income-inequality with a portion of this neighborhood having high-priced residential areas with the associated retail areas and a mixed in low-income housing region. While this may not be a root cause, it displays high correlation to research provided on the subject.

In 2014, there were 4,859 aggravated assaults reported by the FBI-UCR. While this equates to approximately 809 per 100,000 persons, we again see a disparity in assaults across the city. 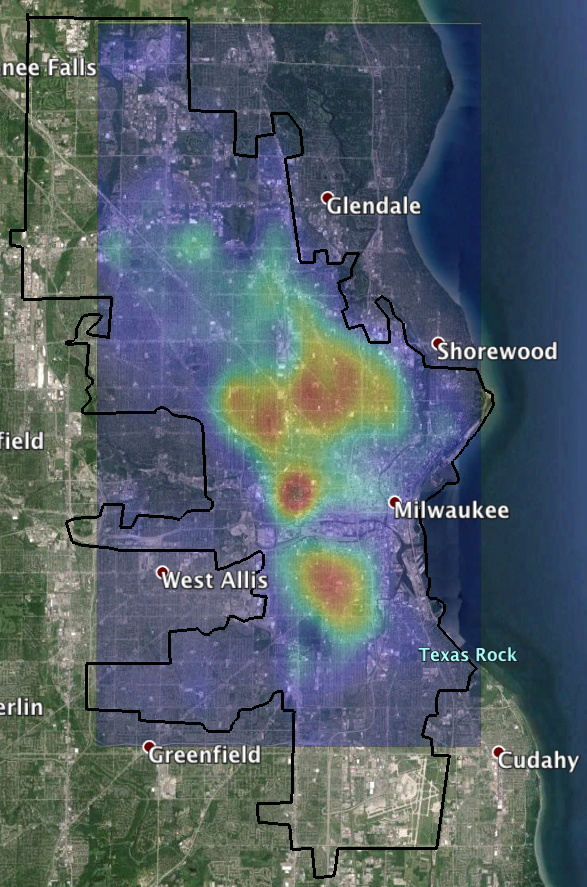 We see that the four regions where robberies occur, assaults occur in the same manner. However, the regions are not as “red” as they are in the robberies. Since the distributions must have the same volume of 1, this means the assaults must be occurring in some other areas. These areas are up in the farther north-western section of the city, in a small neighborhood of Silver Spring; and in the area of Marquette University and downtown.

In Comparison to Oakland?

As we compare these two cities, we find that while both cities are considered violent by rankings standards, we find that the true rates of violent crimes are much lower than perceived. For instance, in Oakland we identified that a random person should experience a shooting once every 50 – 900 years, depending on location in the city. For Milwaukee we saw this was every 45 – 1900 years. So how do we compare the cities? Using straight rates does not take into account the non-uniformity of the cities, nor does it take into account the size of the city. The best we can do is compare the percentiles of per person based on regions and provide a city by city illustration.

How effective are police forces?

A common perception of crime statistics is the fact that it identifies the effectiveness of police forces. A common misguided practice is to compare numbers from year to year. If we see drops, people tend to credit police forces. If we see increases, people tend to blame police forces. In fact, several factors contribute to increases and decreases in crime. One thing is for certain, the totals do not give a measure of how well a police force operates. Instead to measure this, a police force must silently turn a blind eye to crime and allow it to get out of control to the best of its ability. The natural crime rate will spike to it’s population-controlled crime rate. We can then take the difference between current rates and non-enforced rates and identify the comparison. Since this is not going to happen, we’ll never know the true effectiveness of police forces.

Instead, this type of analysis should be used to help identify methods for distributing police forces, distribute funds for specific resources that improve well-being for the specific neighborhoods, and allocate resources for data collection and analysis for identifying root causes for the crime.

So what do you think? What city would you like to see?

One thought on “Milwaukee, Wisconsin”