The figure below shows the distribution of Republican scores (red) against the Democrat scores (blue). 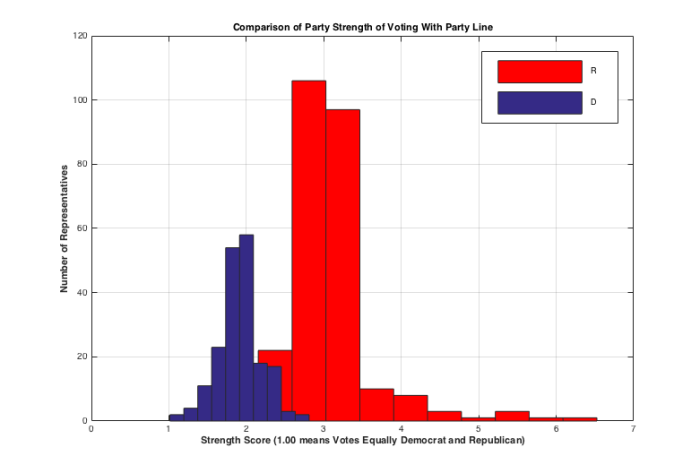 For the 192 Democrats, we see that the scores tends to be between 1 and 2.5. This means that Democrats tends to share between 50% and 71% of their votes with their own party.

Note: Don’t be baffled by the numbers; this is conditional probability. What these plots show are that Democrats tend to cross over an vote with Republicans on certain matters; while Republicans rarely come across to vote with Democrats. A clear example is the following::

Suppose House Resolution 90210 (HR 90210) is put to vote. Suppose the bill is considered a “Pro-Republican” bill. Furthermore suppose that all Republicans vote for the bill; but only 60 of the 192 democrats vote for the bill. Then the resulting score for each republican is 253 / 60 = 4.2167. For Democrats that voted with the Republicans, their score is 0.2372. For the Democrats that voted against the Republicans, their scores are all 132.0000 (denominator is automatically set to 1).

Then for House Resolution 8675309 (HR 8675309) the votes go completely split. All Republicans vote together; all Democrats vote together and against Republicans. Then the scores become the following:

This little example for two bills shows an example of a sect of Democrats never compromising; Republicans not compromising but sharing some ideologies with Democrats; and Democrats who had compromised with Republicans.