With the penultimate week of the college football season just completed, we witnessed Stanford solidify their ranking with a 38-36 victory over the Notre Dame Fighting Irish in Palo Alto and Ohio State deliver a drubbing on Michigan to the tune of 42-13. Not to be outdone, Oklahoma demolished intrastate rival Oklahoma State 58-23. Most importantly, several high-ranking teams squared off to help shake out the gridlocked rankings.

Applying a Bradley-Terry model, we see that Clemson still controls the top of the rankings with a spotless 12-0 record. Comparing to the updated Coaches’ Poll, several of our rankings are close to the Coaches’ rankings with some exceptions. But first… rankings: 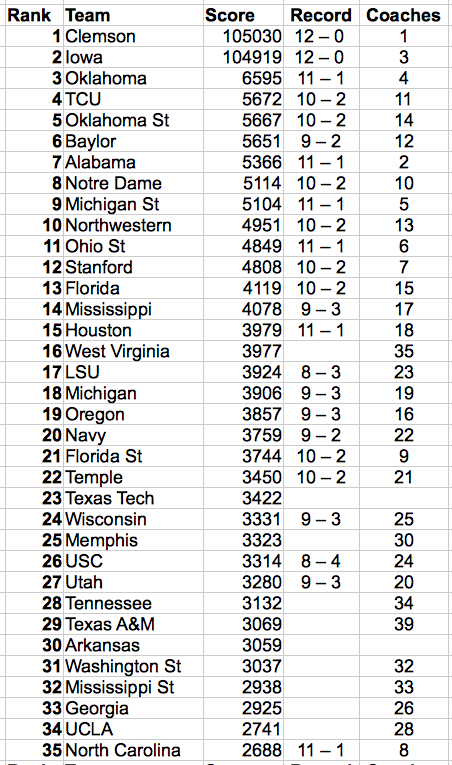 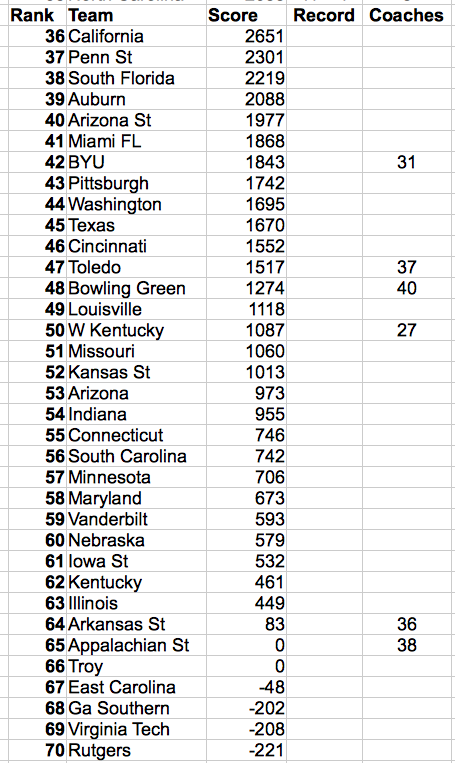 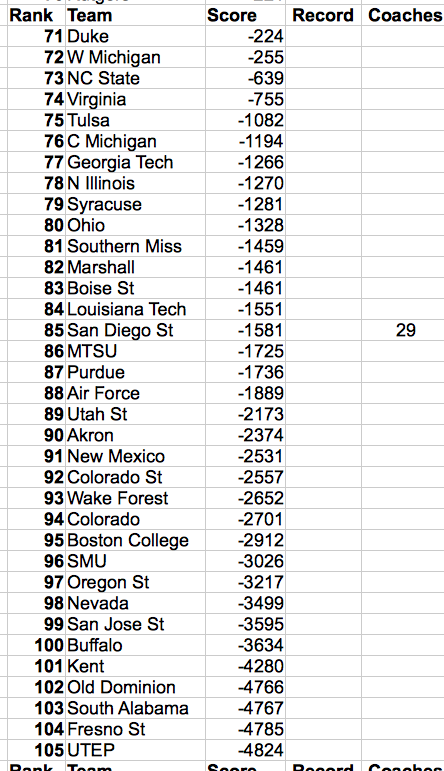 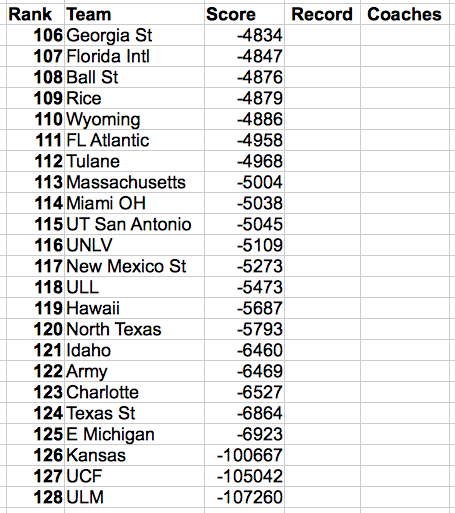 Again, North Carolina headlines our “Most Overrated” team. Ranked 8th in the Coaches’ Poll, North Carolina has posted an 11-1 record without playing a single top 25 team for the entire season. In our model, they are posted at 35th.

North Carolina’s first challenge will be on December 5th as they take on Clemson in Charlotte. If North Carolina posts a win, expect a large jump in the rankings for our model. Until then, North Carolina’s record against Top 40 teams is 0-0, with an opponent’s combined records being 53-67.

In our model, West Virginia ranks high; almost embarrassing high as they have posted a 7-4 record. With a ranking of 35th in the Coaches’ Poll, West Virginia is ranked at 16th in our model. Taking a look into the games played, however, we find that West Virginia has played one of the toughest schedules in the NCAA.

What West Virginia hasn’t done is lose to a low-ranking team while gaining a win over a ranked team; unlike North Carolina, who is ranked 8th. West Virginia has only one more game remaining against Kansas State (5-6, NR) on December 5th.

We believe that Texas Christian is the most overrated in our model. TCU’s only two losses are to Oklahoma and Oklahoma State, both on the road. Combined with their win at Texas Tech and home against Baylor, the Horned Frogs’ losses are marginalized due to the games being road games. Due to these results, combined with Oklahoma State’s losses to Baylor and Oklahoma have pushed TCU’s resume to be slightly higher perceived. But we can see why TCU is ranked high. The only question is why 4th instead of 7th?

We put two teams here because they are both pushed outside of the top 4, only have one loss, but are each rated below Baylor, Oklahoma State, and TCU.

Alabama’s lone loss has come against Mississippi (9-3, 14th Our Model, 17th Coaches). Since then, Alabama has run off 9 consecutive wins over Georgia (9-3, 26th Coaches), Arkansas (7-5, NR), Texas A&M (8-4, 39th Coaches), Tennessee (8-4, 34th Coaches), LSU (8-3, 23rd Coaches), and Mississippi State (8-4, 33rd Coaches). Due to the mathematics of the model and the low amount of games played, the loss to Ole Miss weight Alabama towards the bottom. In fact, removing the game and re-running the rankings, Alabama settles in at number 2 overall. An indication that they are underrated in our model.

Michigan State falls under the same problem as Alabama, only with a loss to a low-ranked Nebraska (5-7, NR) squad. This is the sole reason that Michigan State is ranked as low as they are. With this single game removed, Michigan State leapfrogs to 4th overall, still behind Clemson, Iowa and Alabama (with their lone loss removed). It suffices to suggest that a leave-one-out cross-validation ranking model be used.

On December 5th, we get a couple exciting games with Alabama vs. Florida in Atlanta, GA; and with Michigan State vs. Iowa in Indianapolis, IN. These games will hopefully help separate out a top 4 for the College Football Rankings.