With the Major League Baseball season creeping towards its finale on Sunday, October 2, there are a total of 684 remaining games over the next seven weeks. Currently most teams have played 116 games, leading to approximately 46 remaining games. Fortunately, this means no teams are currently eliminated from the playoffs (while the Braves are trying pretty hard to be eliminated before September). Currently the standings are as follows: 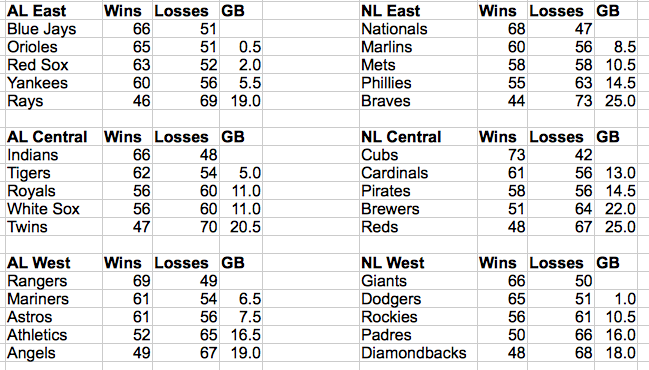 Here, we once again apply our simulation strategy based on previous match-ups over the course of the season. Applying a continuity correction and a Markov Chain Monte Carlo, we are able to simulate the wins and losses for each of the remaining 684 games.

Under the simulation scheme, we see some teams with “zero” probability of making the playoffs. The real probability is sub 0.0001; which will round down to zero. Some interesting results from the simulation indicate that the Marlins have a great chance of catching the Nationals for the NL East crown; while the Cardinals and Tigers are expected to fade out over the next seven weeks.

The playoffs are currently expected to be:

It should be noted that there are still nearly 700 remaining games and that the variation on the probabilities are relatively large; roughly 3-5 percent on the high probability teams. As the season progresses, we will continue to produce updates to the probabilities.